Analysis of Paid Readership Across The World

Paying for news doesn’t seem like such a taboo subject anymore. It seems that in recent months it ‘s the only insurance you can take to make sure that news is reliable and not fake. But what’s interesting is looking at what patterns are in countries and continents around the globe when it actually comes to paying for news. You wont be surprised to hear that the trends are positive. But by how much is what we will cover. Who are the nations that aren’t phased when it comes to parting with their money?

A recent report by the Reuters Institute for the Study of Journalism was released, which looked at paid models across European countries. The report sampled 171 different news organisations, ranging from broadcasters, digital-born, newspapers, and news magazines. That being said, the findings in the report are quite interesting. From 171 news organisations sampled, more than half (66%) of newspapers operate some form of pay model, with the most popular being the freemium model.

This is not very surprising, due to the fact that in the United Kingdom, the majority of newspapers that have pay models in action offer a freemium pay model, for example, The Spectator, The Telegraph, and The Times to name a few. Let’s broaden our horizons, and include weekly magazines as well as newspapers, then the number increases to 71%, once again with the freemium pay model being the most popular choice. I personally tend to back the freemium aspect from a publisher’s point of view simply because it allows a reader to be seduced/teased/enticed by an author, and eventually leads them converting into a paying subscriber.

With the United States, there are some similar trends that follow news organisations in Europe. In April, the Financial Times was the latest news organisation that reported a sharp increase in digital subscriptions during 2016. Now it won’t come as a surprise that this sharp increase was due to the #TrumpBump. Political news reporting in the past year has led to a sudden sharp influx of digital subscriptions, and it’s not necessarily just due to the American General election. The world’s eyes were on edge after Brexit, and the French national election, however the political boom hasn’t stopped yet with the German National election looming. I’m going to mention fake news and reliability issues here, but when it comes to a nation deciding who runs the country for at least the next four years, then readers need to be absolutely sure and paramount that reporting is carried out to the utmost accuracy. If we were to highlight individual publisher, The New York Times added a healthy 267,000 subscribers from October-December 2016. That’s an incredible amount in three months, over the course of that year; the number was closer to half a million subscribers to its digital platform. Take a look at fig.1 below, it shows the increase in subscribers of selected news organisations in 2016 compared to 2015. (via Statista) 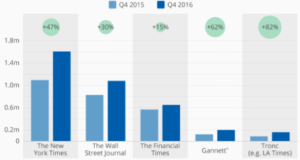 The influx of digital subscriptions doesn’t just rest with western organisations, as the number of Chinese Internet users paying for digital content has greatly increased. China’s digital media industry is undergoing a massive transformation, and the nation has been predicted to outstrip the US digital market by 2018. iiMedia research suggested that almost 981 million internet users in China were willing to pay for content in 2016. In that same year, Chinese users spent 212.3 Billion Yuan (24.2 Billion GBP) on paying for digital content online. Now I understand that digital content isn’t strictly confined to news organisations, but the sheer fact that consumers are willing to part with their money gives news organisations a fantastic opportunity to be able to monetise their content.

Paid readership across the globe has increased, and quite frankly I don’t see an end to it. It wouldn’t surprise me if the sharp influxes slow down by the end of the political tumult that’s gripped the globe, but when the Internet of Things takes centre stage, the access to digital news will be a lot easier across the house, providing even more of an opportunity to monetise content for publishers. The Duopoly are also playing their part in order to increase fact checking and render themselves as trustworthy sources amongst readers, but the fact is, if you want something reliable and of a quality service, you have to pay for it.