Subscriptions on the rise. What’s the secret?

Over the past year, a lot of publishers have seen a vast increase of paying online subscribers that have left the rest of us scratching our heads. Statista released a chart earlier this week showing the growth of paid digital online subscribers from 2015-2016 across a selected group of big-name publishers. Across the board, you see increases of subscribers ranging from 15% all the way through to 82% compared to the year before, brilliant results. (See fig.1) 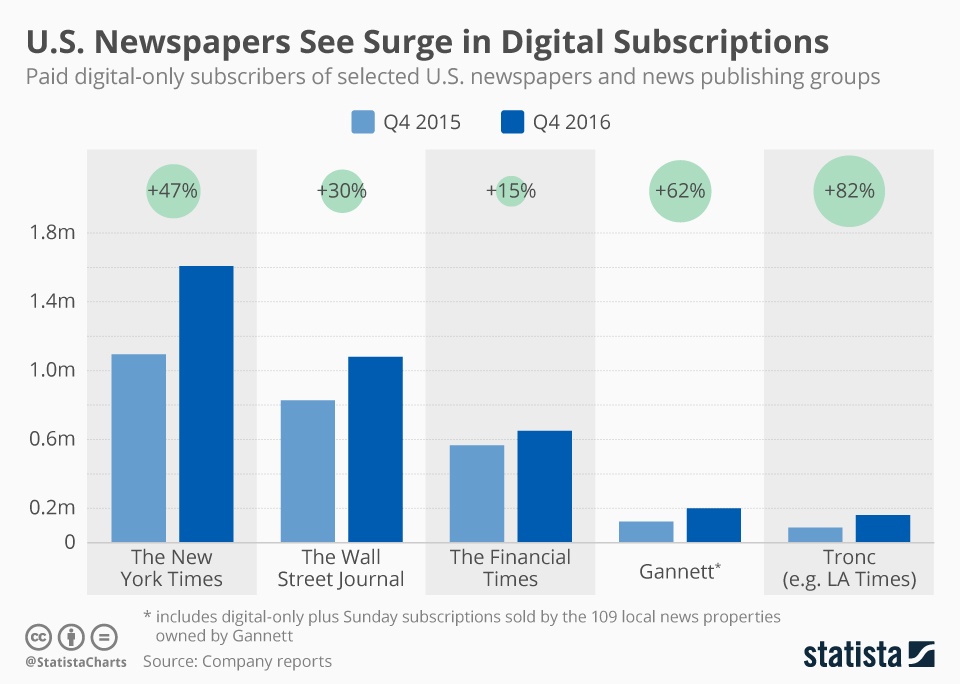 (Fig.1 This chart shows the number of paid digital-only subscribers of selected U.S. newspapers and news publishing groups. Via Statista)

You can see that these big Publishers are deploying new innovative tactics that readers love and are adhering to. It can often be a step into the unknown and sometimes can prove to be unsuccessful. So how do they do it? How can so many publishers drive their online paying subscriptions up so much that it leaves their rivals blue? This blog will look at recent individual case studies of publishers that have taken a gamble that has paid off.

The Spectator is a politics and culture magazine that saw its first issue in 1829. Incredibly, the publisher is now adding 400 new paying subscribers a week. The Spectator’s editor Fraser Nelson believes that the sudden influx is solely because of people’s willingness to pay for quality journalism. Whilst people are willing to pay, for quality journalism, the paywall software that was implemented in January of this year that’s being used is almost like a secret weapon. The software –provided by Evolok- gives higher detail in the data that’s available to what subscribers are consuming, so they can further develop how they turn the anonymous user into a paying subscriber.

The software also allows them to refine and improve customer experience for their existing subscribers. Customer retention is key. This software isn’t just for their website, it has also been deployed to convert podcast listeners and email newsletter subscribers into paying customers.

British newspaper The Times has been behind a hard paywall since 2010. This means that unless you were a paying subscriber, you couldn’t read any of the content online. Last year in March however, they made the decision to scrap featuring breaking news and to merge both The Times and the Sunday Times websites. The plan was to focus on an editions based strategy that updates three times a day: 9am, 12pm, and 5pm. The times head of digital stated “Readers don’t come to us for breaking news; they can go to the BBC and Twitter for that, which are free… They come to us for the authority of our reporting, opinion and analysis. Breaking news has become a commodity, and it’s hard to charge people for it. We believe in the power of digital editions.” The website also had a complete revamp, including a new mobile friendly app for a cleaner and friendlier user experience.

Since this revamp, The Times has seen their subscription sales jump a whopping 200% in the last year. Subscriber attrition rate is also at a record low, down 4% compared to the previous year’s figures –Catherine Newman, Chief Marketing Officer at The Times.

The New York Times is one of the most famous news publishers in the world. You hear the name and it’s synonymous with quality journalism. ‘The Grey Lady’- The NY Times’ nickname- has recently been seeing some interesting statistics in regards to the largest demographic of its audiences. 18-34 year olds make up for an astonishing 75% of its traffic. The publisher –despite operating with a metered paywall- has a total of 3 million paying subscribers, raking in $500m a year in digital revenues. Considering the President of the United States accused the publisher of fake news, $500m a year isn’t bad.

So what’s going on in New York? Well to put it bluntly, the open approach that The NY times has on evolving technology is proving very successful with the younger audiences. The NY Times haven’t shied away from trying new things, below are just a few things that they’ve tried

Younger readers thrive and enjoy the originality and new innovative way that the news is being reported to them, and this is showing in the amount of revenue and increase in subscriptions that they have.

Just a short trip across to the English Channel, as opposed to the Atlantic (see NY Times), there’s a French publisher that’s causing a bit of a commotion in the industry. Nine year old Mediapart are somewhat experts when it comes to making readers pay for content. Through two weeks in March of 2017, they signed up 3,000 paying subscribers, bringing to total up to 140,000 paying readers. Each day it adds another 400. Considering they don’t sell print, those are envious numbers to have.

What’s interesting seems to be the tactic behind how they’re gaining such an influx of readers and subscribers. Quite simply, it’s opportunistic marketing done perfectly. Mediapart used the impending French presidential election to drive up their numbers. Campaigning for the election began in mid-2016, and the marketing team saw and grasped an opportunity. They offered a deal of three months for 11 euros, which incidentally is the price of one and they never looked back. Internal figures state that traffic doubled from 2 million to 4 million monthly visitors.

What’s even more mind-boggling is that the publisher doesn’t advertise. All of the revenue comes from paid subscriptions. The publisher received nearly €2m in profit in 2016. But it’s not just reading political content that has driven subscriptions. They’ve given their readers a chance to join in with the conversation. Subscribers have the ability to publish their own blogs –which aren’t behind the paywall, so anybody may access them-. It empowers their readers to have a voice, and this tactic has been received with welcome arms.

The above four case studies each have taken a new tactic when it comes to delivering content, but each of them have found a successful melange. Personally, I find the tactic of the NY Times the most appealing to me, as I too fit in the 18-34 demographic, and love new innovative ideas that stretch the boundaries of technology. It’s fair to say that research is proving a lot of publishers globally are navigating ways in which to survive the changing landscape of the publishing industry.