Paywalls have always had a stigma that they don’t work for most people and only large corporations can be success stories. This stems from a misunderstanding about paywalls. I’ll be honest, prior to when I started to learn about paywalls, my initial thought process on them was certainly negative. I saw paywalls as annoying and selfish to be honest, however right now in this day and age, I feel they are necessary. Why? Fake News. As everyone can upload and share whatever they please, it’s getting harder and harder to differentiate from what’s legitimate and what’s fake.

Fake news has become more than an annoyance, it’s a genuine problem online. Just last week, Facebook have taken another measure in order to try and stop fake news and clickbait. An in depth view on fake news and how publishers can take advantage of it can be found here.

So where does this tie in with paywalls? I like to look at paywalls as a guarantee; an insurance. You pay for what you get. With paywalls, you pay for quality journalism. You’re able to access news that you want, without annoying ads popping up every two seconds, and with Evolok’s framework, you’ll also be presented with personalised content that will appeal to you, based on your journey around the site.

Interestingly enough, statistics are also showing that the implementation of paywalls is increasing. More and more publishers are launching paywalls, and they wouldn’t be doing so if people weren’t ready to part with their money for quality news. A recent factsheet released by the Reuters Institute for the Study of Journalism. The research conducted looked at 171 different news organisations across europe, in countries such as the U.K., France, Germany, Italy, Finland, and Poland, just to name a few. Across the findings,  66% of newspapers and 71% of weekly newspapers and news magazines had some kind of pay model. For a breakdown of the paywall models across different platforms, see fig.1. 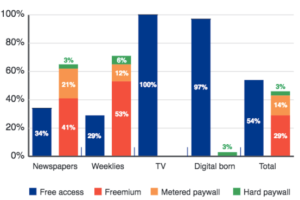 In regards to news organisations that do have a pay model installed, the average monthly subscription fee across the board was £13.64. Unsurprisingly, the highest average fees were in the U.K., at £18. For a detailed look at average prices, see fig. 2 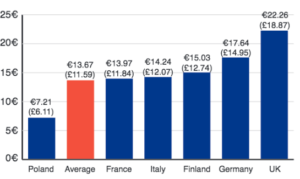 Fig.2 Average prices of paywalls across Europe, per country.

Benefits of paywalls from a consumer’s point of view

Now you may be reading this and think, “Why on earth would I pay £20 a month when I can just live with a few ads?” It’s a fair question, it’s one that we all ask before making a commitment to an online subscription. But news is changing. It’s not just a case of having an ad free article that’s been reported well. The new strategies that publishers are launching is what you’re essentially paying for. With publishers targeting millennials, news reporting has changed from your conventional methods. With paid subscriptions, publishers are offering podcasts, compatibility with different platforms, offline modes, and of course single sign on security. The NY Times for example has taken a mobile first approach as their largest demographic of users are millennials. Would you have thought that 360° video and VR would ever be used to bring you news? And whilst you may think that this is all gimmicky, these new approaches are proving very popular amongst readers.

As touched on very briefly before, there’s also the security aspect of not having to enter your details more than once. A single sign on procedure reduces the risk of your personal data being compromised if a cyber breach were to occur.

In summary, what you’ll be paying for are new and innovative, ad-free ways to consume your news. It’s a premium service, and it may not be to everybody’s cup of tea. I’ll admit, even I was sceptical, but the convenience of mobile and tablet compatibility, ad-free pages, offline pages, innovative methods and reliable reporting tip the balance for me. Even the little things such as the pages not taking an age to load. Trust me, it makes a difference.

How to Collect First Party Data in the Cookieless World?